Pine Jog was first owned by Henry M. Flagler who purchased the land shortly after 1893 and for several years the property was held by Flagler’s company, the Model Land Company. In March of 1929, the land, including Pine Jog, was offered for sale at the West Palm Beach Court House and control passed to the Lake Worth Drainage District in 1930. During this time and until 1946, the land was occupied by a few “squatters” and various farm plots were operated without regard to ownership. In addition, much of the land was open range used for grazing by semi-wild cattle. The cattlemen burned the property annually. The fires were intended to stimulate growth of tender forage for cattle and to eliminate competition from other plants. The annual fires, cattle, and farming plots impacted significantly on the natural vegetation of the property.

The Pine Jog property lies within a shallow drainage basin between the Loxahatchee Slough on the west and the Lake Osborne Basin to the east. Since the land lies between ridges on both sides, water originally flowed through the area as indicated by the remaining cypress trees. Early records indicate that Pine Jog was predominately wetland from the late 1800s to as late as 1940. Between 1929 and 1940, pine trees were harvested from the area and by 1934 there were few seedlings over one meter tall. Thus, the present pinewoods community at Pine Jog contains trees no older than perhaps 50 years. Drainage projects in South Florida began as early as 1870, and the first effective projects occurred in the early years of 1900. Before the Palm Beach Canal was finished in 1917, water was high enough in Lake Clarke that Seminole Indians canoed along the marsh edge to a trading post near what is now Dreher Park. Prior to drainage, Pine Jog consisted of three plant communities: wet prairie, marsh, and low hammock. 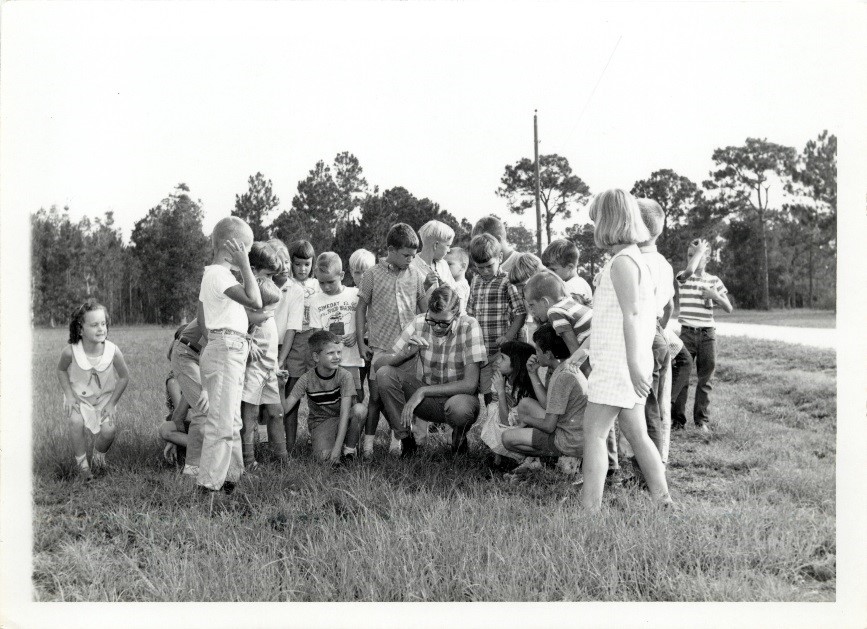 In 1946, Mr. and Mrs. Alfred Kay purchased the property from the Lake Worth Drainage District and called it Pine Jog Plantation, named after the pines that inhabited the land and the road that it bordered, Jog Road. The Kays grew flowers, fruits and vegetables. From 1960 to 1962, trails were cleared through the pinewoods and two main buildings, which housed classrooms, and offices were constructed.

In the beginning, Pine Jog operated under the sponsorship of the Florida Audubon Society until early in 1960, when Pine Jog was established as a conservation center and became affiliated with Florida Atlantic University. Within two short years by 1962, Pine Jog had established itself as a natural science education center of considerable excellence and reputation.

Between 1962 and 1970, Pine Jog continued to grow. A small auditorium was added to the original buildings and, in subsequent summers, a library was built as well as two additional offices. In 1965, Florida Atlantic University began to offer off-campus courses at Pine Jog and much practical assistance for the future.

In 1968, interested friends made possible the construction of a pond, authentic Seminole Indian chickee and boardwalk in the marsh. The pond was subsequently enlarged in 1975 when Pine Jog received the Founder’s Fund award from The Garden Club of America. The Garden Club of Palm Beach sponsored Pine Jog for this national award and continues to support Pine Jog today.

From the beginning, the philosophy of Pine Jog has been to nurture the ability of students to observe and to evaluate their relationship with the natural environment. Pine Jog is steeped with the inspiration, dedication and guidance of its founders and supporters. Pine Jog is an outstanding success story, not only because of its educational contributions to the community but primarily due to the efforts of many people who care and contributed time and money to the continued existence of a place, and the enduring philosophy of preservation, protection and promoting awareness of our natural environment. Let us all help to “…open windows…” for ourselves and succeeding generations. 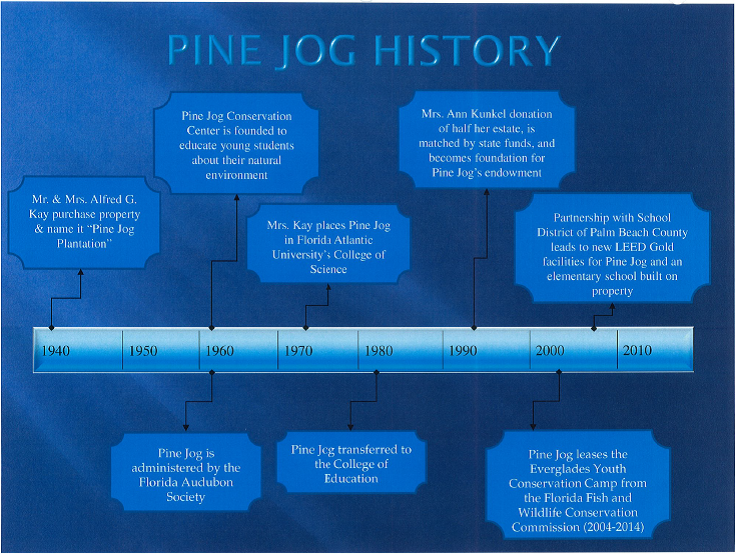